International Day in Support of Victims of Torture

"They came to get me at night when the power was off in the area, and made sure not to be identified by my family. I was taken to the infamous security offices in north Nyala, which is known as one of the worst Ghost Houses in Darfur. The torture was severe and took many different ways such as beating, flogging, stress positions, electric shocks, etc. However, the worst method was when they ordered me to walk barefoot on broken glass and when I resisted I was electrified and fell on it. I still carry the scars from that horrific experience."

This is a quote from Ibrahim Abbaker, age 29, an Electric Engineer from Nyala, Darfur (Sudan) who was just released a month ago after being arrested many times and tortured due to his peaceful opposition to the regime of Sudan’s President al-Bashir. In this quote, he is referring to his last arrest in May, 2011 when he participated in a protest rally during the visit of the Sudanese Vice President to Darfur.

In Sudan, the regime of President al-Bashir continues to be ruthless in using torture against opposition forces. This has been Sudan’s formal policy especially since the President was indicted and was issued an arrest warrant by the International Criminal Court.

Another example of maltreatment of prisoners is found in Chile where imprisoned native Mapuche activists have just ended an 86-day hunger strike. “They are protesting their unfair trial and harsh sentences under The Terrorism Act. They are not terrorists. They demand the return of the Mapuche’s ancestral land,” said Ester Orellana, of Amherst and a Native Mapuche from Chile.

Amnesty International’s Amherst Group 128 observes the United Nations’ International Day for Torture Survivors this June 26th with cautious optimism. We have an administration in the White House that has voiced its commitment to stopping torture and took practical steps to shut down the infamous Guantánamo Bay prison.

Still, the killing of Osama bin Laden has brought the torture debate back to our shores. Congressman Peter King, Chair of the House Homeland Security Committee told Fox News that “the success of the hunt for bin Laden was due to waterboarding.”

Information extracted under torture has been found to be false since a tortured person will say anything to stop the pain. Sen. Dianne Feinstein asserted that bin Laden's location was pieced together after years of intelligence-gathering rather than by torture. If these immoral acts are not declared illegal, but rather allowed to continue through our silence, then we must live with the reality that we are all guilty of torture.

Each one of us must speak up and demand that our government set an example by denouncing and ending our usage of torture, right now and in the future. Continue this discussion with Amnesty International Group 128 every other Saturday in the summer by the Amherst Farmer's Market in the Town Common.
Posted by Blog Maintainer at 4:27 PM No comments: 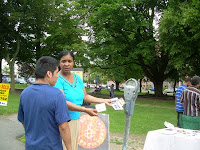 After the specially interesting and interactive table @ the Farmers Market on 6/17 (thanks to Tamador, a theater artist), the group moved to Jones Library and had our first Summer meeting. A good action plan was developed after reflecting on last year's plan.

here is a brief summary of the outcomes:
* Review of last year's plan: We briefly went over some of the activities we organized or co-sponsored. These are: 13 Information Tables at the Farmers Market; Holding 3 meetings; Increasing memberships; working and reaching out to students groups; Organizing the Human Rights day (along with Amherst Town Human Rights Commission); organizing/participating in events @ Smith College, Springfield College, and UMASS. Co-sponsoring the MLK Breakfast; and Thomas Paine events. In addition, the Fundraiser Tag Sale was exceptionally successful last year due to attracting legislators and media coverage. A major challenge was how to get the membership more involved and motivated to participate in activities and events. 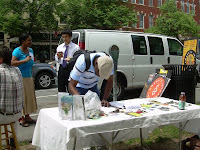 * Discussion on 2011-2012 Work Plan: We spent sometime to address this new work plan and benefit of our previous experiences. The following offices were suggested and created with one or more in each:
1. Membership Office: Tamador & Gloria................... mainly to organize our membership list and help in contacting inactive members and motivate them more, etc.
2.Media office: Fanny and is looking for more to help her: This office will be responsible of communication with media, and issuing our 2-3 Press releases (HR day, Refugee/Torture Survivors day, International Women's Day).
3. Regional office Liaison: Ester will be helping us in this area especially because of her frequent visits to Boston in her other volunteer work with the Union.
4. Blog/Website office: Ismail & Cylvanna volunteered to help enhance and maintain our Blog
* Petitions and POC: We discussed the progress we made in this area especially in helping to release the adopted POC cases: Aung San Suu Kyi (Burma); and Karim Amer (Egypt). Two new petitions were sent to us from the regional office (India and Chad); and 2 POC cases will be assigned to us.
* Amherst TV Show: We disscussed the request of Mr. Isaac Ben-Ezra to host a 30-min TV show with the group in regard to our success on the 2 POC cases. Fanny, Ester and Mohamed will be working on this piece.
* Budget: We spent like $45 on sponsoring event and printing a brochur for Springfield College event (a full report will be presented in our next meeting)
* Other: The North East Regional Office Coordinator, Cynthia Gabriel, is planning to visit with our Chapter sometimes in Mid July. plan to use her visit to activate our membership.

Posted by Blog Maintainer at 3:08 PM No comments: