PORTRAIT OF OUR MEMBER TSULTRIM DOLMA IN UMASS' DAILY COLLEGIAN 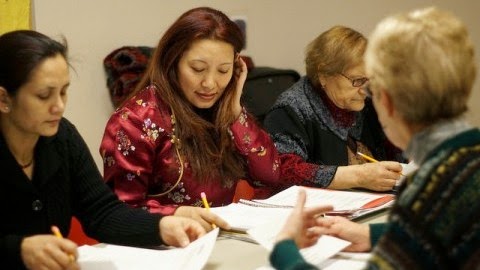 Tucked away at 742 Main St., in an offshoot of the Jewish Community Center, lies the Amherst office of the Literacy Project, an unassuming gathering place for people in search of an entryway to a future that, considering many of their pasts, may have once seemed unobtainable.

The Literacy Project began 30 years ago as a community funded program that provided free classes for individuals without a high school diploma to improve reading and comprehension skills and prepare for the HiSET exam, formerly the General Education Development test.

The five offices throughout western Massachusetts now receive grants from the Massachusetts Department of Elementary and Secondary Education but still rely on the donations from local businesses and tutoring commitments of volunteers.

Eileen Barry, an instructor with the project for the past five years, said the Amherst office receives an especially diverse influx of students.

“Everyone comes to us with a different background and levels of education but still have to meet the same standards. They require a unique approach at their own pacing and we work to accommodate that,” she said. “We serve former convicts and drug addicts, victims of abuse and many immigrants who are political refugees. We’re like a schoolhouse of all trades.”

Barry said students go on to attend community colleges, medical assistant programs and find full-time careers, and while the success rate isn’t comparable to traditional high schools, the Literacy Project reopens doors that had long since closed. The interaction extends beyond the standard teacher-pupil relationship.

Barry’s current class consists of mostly immigrants working to improve their reading and comprehension before they progress onto the second stage of the program to prepare for the high school equivalency exam. To embrace the diversity of the group, Barry had her class speak about their home countries and personal journeys to America.

One of those students was Tsultrim Dolma, a cheerful middle-aged woman from Tibet now living in Amherst. Barry said when she finished retelling her story the small classroom fell silent.

“You can imagine the shock in hearing all that these people have been through. But when I first heard Tsultrim’s story I was blown away,” she said. “You would never know from speaking with her all that she’s been through. She’s so warm and friendly.”

Dolma was born in a small village in Eastern Tibet, not long after the Dalai Lama signed the 17-Point Plan for the Peaceful Liberation of Tibet that granted China sovereignty over Tibet, according to the Council of Foreign Relations. Many Tibetans believe the Chinese government coerced the Dalai Lama, currently in exile in India, into the agreement.

In the decades following the Tibetan annexation, China outlawed demonstrations of Tibetan culture and public support for an independent Tibet. According to Dolma, government officials controlled almost every aspect of their lives.

“I remember that all the adults were always afraid. I would ask about the ruins of temples that the Chinese destroyed and the elders of the village would hit me,” she recalled. “They feared they would disappear into prisons or be killed if they were heard talking about the past.”
Homes were liable to be searched at random. Fathers were forced to work far from their homes at fisheries or in the mountains under the watch of overseers. Mothers were forced to leave their children to work the fields. The rural village of about 100 residents was completely isolated.

“There was no electricity, no hospitals, no schools. Children starved and picked through garbage for food,” Dolma said. “I never knew there was a world beyond my village or any other way because no one was allowed to teach us.”

Dolma said for the first decade of her life, she had no concept of religion, of a culture, of an identity. Her only exposure was the silent ruins of temples that spoke of a people distant and extinct like a “ghost everyone was too afraid to talk about.”

According to Dolma, when she was 11-years-old, Beijing permitted religious practices in the Tibetan city of Lhasa. She walked the three-month pilgrimage with her father. It was her first time in a city, the first exposure to a culture and religion that was relegated to the background of her life.

At the age of 14, she made the same pilgrimage with three friends in search of an education and something more than the future of labor that her village promised. She survived the three months of walking on the kindness of strangers. She arrived at a monastery where a cousin lived and spent the next year aiding the nuns during the day and taking reading lessons at night.

Civil unrest grew in Lhasa, protesters called for the return of the Dalai Lama and acknowledgement of basic human rights for Tibetans. On April 8, 1987, the birthday of the Buddha, Dolma joined a group of protesters.

“I saw people next to me killed by sniper rifles. The police shot tear gas at us then squeezed hundreds of us into vans and took us to prison,” Dolma said.

For the next four months, Dolma said she was kicked, punched, and shocked by guards. They isolated their captives and exposed them to extreme heat, starvation and prolonged stressful positions.
“They would put a bag over my head, kick me to the ground and laugh. I was in handcuffs so I had to use my chin to pull myself up. I kept saying ‘you must get up.’ I had to know why they were doing this,” Dolma said.

Upon her release, Dolma spoke to the BBC before returning to her village in Eastern Tibet. After a year of living in fear and under heavy surveillance, she embarked on a yearlong trek that led her through the Himalayas to India where a large Tibetan refugee population still lives today.

There, fellow refugees entered her name into a lottery for political asylum in the United States, a country only a year earlier she did not know existed.

Dolma arrived in Berkeley, California at 21, unable to speak or understand a word of English. Her mind was filled with stories of an impersonal and bustling America. While she was grateful for the chance at a better life, the pain of Tibet weighed heavily on her mind.

“In the beginning I cried every night. I wanted to do something to help but it was difficult. I worked so much because I did not want to take any more from America,” she said.

Dolma spent the next decade moving from city to city and eventually settled in Massachusetts in 1997. She worked in a factory and babysat to support her children and sent money to parents she hadn’t seen since she was 16, and would never see again – both have passed away during her time away from Tibet.

Dolma struggled to adapt and enjoyed the amenities of a modern America but never forgot her home. She’s testified before Congress, met with Newt Gingrich, Amnesty International and spoke to the Boston Globe.

She said the receptions have been heartfelt and sympathetic, but little has come in the form of significant change despite the continued efforts and despair of the Tibetan population. According to the International Campaign for Tibet, more than 100 Tibetans have died from self-immolation since 2009, setting themselves on fire in protest of the Chinese government.

In the past, Dolma chose to use a pseudonym when speaking to the press, fearing retaliation from the Chinese government against relatives still in Tibet. However, she is no longer willing to hide.

“I am not afraid any longer, all I can think about is the young people dying and losing parents, and hiding will do nothing,” she said.

Currently on disability from her custodial position at the University of Massachusetts, Dolma has focused on improving her vocational and writing abilities through the Literacy Project. While pursuing an education is fulfilling a dream she’s had since a child, she hopes it will help reach her goal – to preserve a culture she believes is in danger of disappearing, to give voice to a people she loves and says the Chinese government deliberately attempts to silence.

“So many have similar stories as me. This is not about me or the attention. I am doing this for all those people still in Tibet that go unnoticed. Because I can’t speak that well I need other’s help to help me tell it,” Dolma said.

Janice Fleur, a former teacher at the Literacy Project, met Dolma through a mutual friend in Amherst’s Jones Library ESL program soon after Dolma settled in Massachusetts, and has since helped the Tibetan in trying to spread her message.

“Despite coming to this country penniless, she’s still reached out to so many people. She has this story burning inside of her dying to be told,” Fleur said. “What astonishes me is the courage she has and persistence to keep speaking out. It’s an admirable thing.”

“I think that the Literacy Project has increased her confidence and aided her in reaching her goals,” Barry said. “Math and science are completely new to her but she is progressing very well. It shows how smart she is that she’s able to learn so much with almost no prior foundation.”

Dolma hopes that more exposure to her story will draw the attention of the surrounding college communities to an issue she believes is largely ignored – and is one that affects a community of more than 150 Tibetans in Amherst. She especially seeks assistance in designing a website she created, but admits has little knowledge in maintaining.

“I just want to speak to the Chinese president and ask him to his face, ‘Why?’ He says that Tibetans are Chinese, but then why does he try to destroy them? I want to say, ‘Do you respect your mother and father? Then why do you not treat Tibetan parents the same?’” Dolma said.

“I have no hatred toward the Chinese people,” she added. “It is their government that destroyed my childhood, my life. We are peaceful – you don’t see Tibetans respond with violence like in so many other places. I want to say to their faces, ‘We are all human people, why aren’t allowed the same basic human rights?’”

Brendan Deady can be reached at bdeady@umass.edu.

Posted by Western Mass. Darfur Coalition at 8:02 PM No comments:

HERE IS THE LINK TO WATCH OUR VIDEO OF OUR 2014 HUMAN RIGHTS DAY CELEBRATION OF THE UNIVERSAL DECLARATION OF HUMAN RIGHTS:

You will find incredible performances of original dance, music, poetry, prose, and improv that brought many of the 30 Articles to life!

Thanks to Amherst Media (formerly ACTV) for an excellent job in taping the whole 2hrs+ event of the Human Rights Day that took place last mont on Dec 6 @ Jones Library in Amherst.

Posted by Blog Maintainer at 11:42 PM No comments: