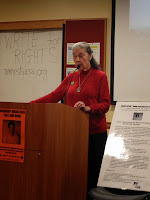 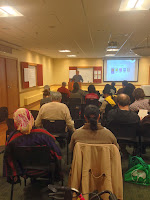 It was another successful Human Rights Day event...!
Thank you to the teamwork of dedicated members of Group-128 especially the core group that worked hard over the past few months in planning...

Our Coordinator Martha Spiegelman said:
"It was inspiring and productive. We had good participation for the writing to prisoners. The film, Dirty Wars, was moving as well as grim, and everyone agreed that we have to make increased efforts to stop the US military-CIA-JSOC-US Administration actions that are against the best interests of our country and the world. 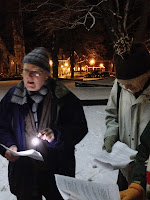 The program was well-received by a good attendance. We found the film very illuminating, and something to inspire us all to continue to work for human rights and justice, and to oppose war and violence. We wrote a large number of letters to several prisoners of conscience, some in China, Iran, Guantanamo, and the U.S. 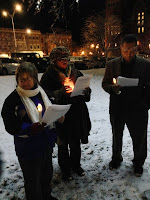 The events of the Human Rights Day concluded today at the annual Candle vigil at the downtown Amherst where a dozen of activists joined the Amherst Human Rights Commission and Amnesty Chapter and read the 30 Articles of the Universal Declaration of Human Rights (the temp was below freezing!).

Posted by Blog Maintainer at 10:57 PM No comments: