As we mark International Day in Support of Victims of Torture, I call on Member States to step up efforts to assist all those who have suffered from torture and other cruel, inhuman or degrading treatment or punishment.
This year is also the 25th anniversary of the Committee against Torture. This body -- along with other UN human rights mechanisms such as the Subcommittee on Prevention of Torture and the Special Rapporteur on Torture -- is vital to strengthening a victim-oriented approach that also includes a gender perspective. This effort was further strengthened by the adoption this year of a UN Human Rights Council resolution focussing on the rehabilitation of torture victims.
I urge all Member States to accede to and fully implement the Convention against Torture and support the United Nations Voluntary Fund for Victims of Torture.  Let us work together to end torture throughout the world and ensure that countries provide reparation for victims. 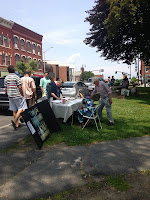 Thanks to Martha and Irwin for organizing another successful information table at the Amherst Farmers Market last Sat...many people stopped by to sign petitions and donated money for our local chapters' campaigns...
Posted by Blog Maintainer at 12:29 PM No comments: